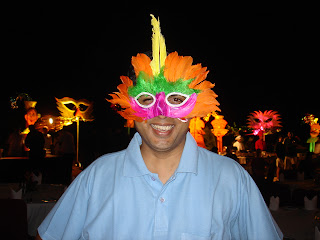 Earlier this week, I went to Goa for a conference.For me this was a new state added to my list, having been to sixteen of them earlier. Yes, number 17 and the youthfulness of Goa go so well together!

I and some of my colleagues chose to stay in beachside tents at a resort on Varca beach.And we flew Kingfisher where we had a completely different experience, which is certainly setting up very high standards. Will tell you why, in the next few lines.

To be frank, we did feel a little weird in choosing to stay in a tent, which did not even have a lock on the door, only a zip slider! But then I have been a little adventurous type in these matters. The Mumbai Goa Kingfisher flight was an A321, which not just had a personal screens on all seats, but had two channels, that were better than the live TV that was playing on other 31. One of them was the GPS channel, which gave the aircraft location, speed, altitude, and time to destination etc. The other one was a real treat. The aircraft had a camera facing the front, so that one could see the pilot view during take-off, landing and indeed during the entire journey. It was an instant hit as soon as we learnt about this channel, and even before the aircraft took off, this was playing all over! The Goa airport is on the coastline, and one should give premium to get this awesome view, as the aircraft comes in to land. We kept talking about it much after we landed. We found Remo Fernandes waiting for his bags at Dabolim baggage carousel and I lost no time in shaking hands with him. That really got us into the mood.

Upon conclusion of the business sessions, we had a little beach party, which of course was attended by King Momo and his entourage. It was good fun. 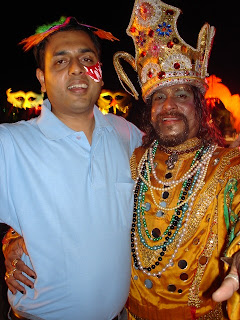 We also had the chance to have a dinner on a boat ambling lazily in gentle waters of Mandovi river, and we soon learnt that the Goan party does not stop, especially for tourists like us. Goa, trust me, we will be back.

ranjit nair said…
The idea of aircraft cameras and GPS is entirely lifted from Emirates ! But ya, have to appreciate Kingfisher on bringing intl standards on domestic flights.

I think that the features are provided as an accessory by Airbus and airlines get an option to either go or not go for them .
6:46 AM, February 20, 2008