Over the last few years, I have read several books around some of the great corporations of the world. Some of them have been written by people who have led those companies. Jack Welch (Straight from the Gut) and Carlos Ghosn(Shift) have written books which essentially talk about business transformation of the companies they have led, or continue to lead. I have also come across books such as those by Madan Birla (I have attended a webinar he gave in my company, not read his book titled Fedex Delivers) who have been senior leaders of some of world's great companies.I have also come across books on a theme where the reflection of a corporation keeps coming back again and again - such as Tom Friendman's The World is Flat (Sorry, but I remain a dissenter when it comes to The World is Flat as a book.) 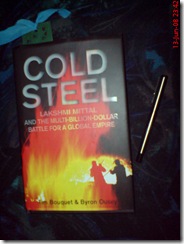 I have almost finished reading Cold Steel by Bouquet & Byron. The books I have read in the past have traced the history of corporations over decades. This one actually traces a momentous event in the steel industry and the events preceding it- maximum spread of the events is just a few months and the level of detail is high, without being excessive. That event happens to be merger of Mittal Steel with Arcelor leading to creation or Arcelor Mittal, which is World's largest steel company. The personalities are real, Lakshmi Mittal & Aditya Mittal from Mittal Steel side, and Josesph Kinsch and Guy Dolle from Arcelor side, ably supported by their aides, which included the Zaoui brothers( Yoel & Michael, who were advising the opposite parties!).

The books is written like a novel, with very significant description of events as they happened. It hold attention, despite the fact that outcome is known. Lakshmi Mittal's determination, Aditya's ability to sync and contribute to the senior Mittal's vision, Joseph Kinsch's ability to stand on his own, Guy Dolle's character in holding their fort show stuff steel tough business leaders are made of.

The narration of the book is excellent. Unlike others who write in a passive voice and impersonal tone, this one has a direct narration of events that happened, giving the impression that the authors were present at all times to record the events. This unfortunately is also the weakness of this book - one does not know when the real facts have been blended with extrapolations to create a readable level of detail. This is also the biggest plus in favour of the book - it helps hold attention.