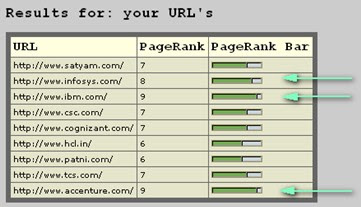 Before
The Washington Post suffered it. Amit Agarwal talks about it. Rishi Raj laments it. Mani Karthik says he does not care. A zillion posts are already up on Google's recent PageRank update.
After 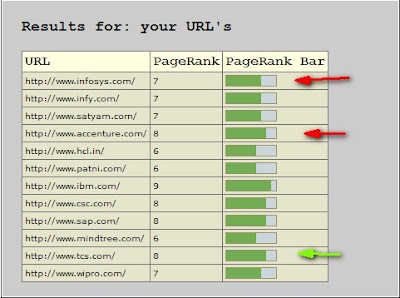 While the web is full of commentary on Google's recent PageRank update, here's some food for thought. We compared the PageRank of some of the leading IT Companies corporate websites in June and October. It is quite puzzling that Infosys.com and Accenture.com suffered a PR drop by one notch from 8 & 9 respectively to 7 & 8 now. In the same timeframe, TCS.com has gone up one level from 7 to 8 level. It is also notable that in the same period the Google reported inbound link to Infosys.com has dropped, which is quite mystifying.

When one compares the Google reported backlink figures among the top names in IT industry, IBM has seen its backlink numbers jump from a high figure of 62,100 to astounding 1,11,000 which perhaps explains its PR 9, before and after.

Most people have speculated that the PR update has affected those sites that have sold text link ads without the nofollow attribute, but that would not apply to Infosys.com and Accenture.com, and perhaps, there are other, less understood factors as well.

As someone said, "my mom will continue to type www.washingtonpost.com to read the news, no matter what PR they have". Well said, that is the habit based consumption, however if conventional wisdom is to be believed, organizations selling services would see their traffic drop in due course.

Unknown said…
My sites www.ed6.com has got PR3 launched in June 2007 in this update. I have not links going out except to www.jhelumtechnologies.com

Jhelum Technologies has only one page and rest are under construction and managed to PR 2 where in it was 0 before the update. www.jhelumtechnologies.com has only 3 links coming in from www.ed6.com, www'googlebugs.com and www.goodrecruit.com No directory listing or any other activity for the domain. How can any one explain this?