Kiran Karnik's departure from Nasscom is a shock 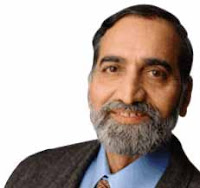 Kiran Karnik, the venerable President of Nasscom is all set to leave, Economic Times, reports. Nasscom is the premier coalition of Indian IT and BPO companies and apart from lobbying and awareness building about IT and BPO, Nasscom has been playing an active role in envisioning future business opportunites in IT & BPO space. This news comes the same day when Infosys(INFY) announced Q4 results and several others are all set to come out with their Q4 numbers in the next few days.
Nasscom's previous president was Dewang Mehta, who established Nasscom's name to what it currently is. Kiran's tenure was marked by days in which IT companies have come across stringent non-tariff barriers such as visa quotas, and outsourcing becoming a negetive term in the west, and other countries having earned the 'emerging destination' label.Whoever joins next, will have quite a challenge on his hands.