Convergence 2020: Live from the Conference Day One

Live blogging is fun, especially if the event is such intensely engaging. BTW, conferences are supposed to happen in large auditoriums or hotel banquet halls, aren't they? Fortunately, the answer is a no. This is the inaugural session of Convergence 2020 and there are over 150 attendees not visible in the picture, because they are online!! 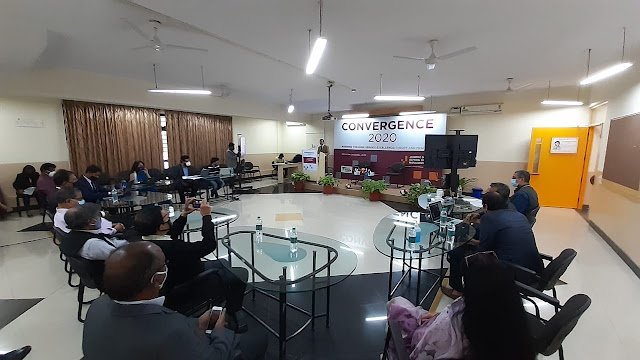 Dr Atish Chattopadhyay, Director, IFIM Business School, while speaking at the start of the event, brought the concept of Service as "seva", which he pointed our as worship, as believed in the eastern philosophy, as opposed to a transaction (or a set of transactions) in the West.

Dr A. Parasuraman,  while introducing the event make the remark (I think he was quoting someone but I could not make a note of that), "Nothing is more practical than a good theory". He was underscoring the point that research is not an exercise in isolation, but it has to be take away for the practice. Such a telling point in few words!!

Two amazing keynotes in the morning session at Convergence 2020 at Jagdish Sheth School of Management this morning. The first by Dr Andrea Ordanini, who joined live from the University of Bocconi. What I liked was his skepticism against blind adoption of technology in service sector. To quote him, " Technology does not have to be adopted, it has to integrated into the organization, because the organization has people - employees and customers!" The second point notable point was that one can bring in technology into an organization, but if employees are not very much convinced on the need to use such technology, then the benefits of such technology will not be so great. Very strong note of caution against blind adoption of technology in service. If customers don't want to use self check in machines, get the employees to do it(Hey, Bangalore Airport)!

The second session was by Dr Jay Kandampully, who likened theory and practice to Vashistha and Arundhati - twin stars - revolving around each other. He also cited Kerala's famed boat race and suggested that research evolves if a group of researchers row the boat in unison!

I had the privilege to moderate the questions, and it was so much fun!

Hey, the paper presentations are beginning, I need to go and see!