MY VIEW:'THE GOOGLE STORY' BY DAVID A. VISE 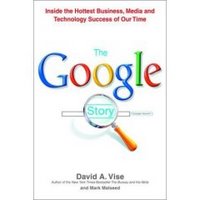 It is perhaps a very tough task to write about a company such as Google, which somehow has become part of our daily life in many ways. I recently read David A. Vise's The Google Story after resisting it for quite a while. I had earlier read John Battelle's The Search and left brief comments on this blog, but not quite kept my word to write more about that.Battelle's book is more about the core theme of Google which is search, arguably. He focuses a lot on other 1000 lb gorillas of the net, whereas David Wise is more focused on Google and Google alone.

It is perhaps, very tempting, but not an easy task to write about Google as a company. This company did not exist 10 years back, and now commands a market cap of USD 155 BN.(Snapshot taken from Google Finance).

A company such as Microsoft which has been in existence for generations now(yes, in tech world 1975 is several generations) and unquestionbly a pathbreaking pioneer and market leader has an M-cap of about USD 294 BN.

The real challenge in writing about Google is that almost entire net savvy population and businesses are exposed so much to this company's services in some way or the other and hence have some opinion on this brand.Many people may have very strong opinion based on their brand experience. While most people think of Google as the search service alone, they have so many other successful offerings as well. To the users like me, Google is about search, to website managers, it has a host of quick-to-use tools, to advertisers, it is about instant reach to a target segment via Adsense and Adwords.A crazy cookie, if you consider that it has less than 10,000 employees wordwide.

While John Battelle's The Search is a lot of adrenalin and reading excitement, David A. Wise's The Google Story is more sober and readable. There is a glaring disagreement in the two books with regard to how the name Google came about. John's book echoed the widely believed theory that an angel investor misspelt the name on the cheque he was making, Wise's version is as follows:
"By the fall of 1997, Brin and Page decided that the BackRub search engine needed a new name. Page was having trouble coming up with that hadn't already been taken, so he asked his office-mate Sean Anderson for help. "I would go to the whiteboard and start brainstorming and he would say, 'No, no,no' " Anderson recalled. ........One of the last things I came up with was 'How about Googleplex .......Googleplex is a huge number'. He liked that. He said, 'How about we try Google?' He liked it shorter. I typed in G-o-o-g-l-e and misspelled it on my workstation, and that was available. Larry found that acceptable and he registered it later that evening and wrote it on the whiteboard: Google.com...And I came in the next morning and Tamara had a written a note saying,'You misspelled it. It is supposed to be G-o-o-g-o-l'.Of course, that was already taken "
Strange about Google, when they were predominantly a search company, people wondered where the revenue would flow in. Then they had Adwords & Adsense and this question was considered settled. When the question of web-based email services was pretty much out of fashion, they came out with Gmail, and it became a craze. Recently they gobbled up Youtube for whopping USD 1.6 BN and everyone wonders how they are going to make money out of it. Perhaps this question too will have a Google style innovative solution.(Interestingly, Steve Ballmer who was in India recently, made a statement saying Youtube was an IP/Copyright disaster waiting to happen).
An immensely readable book. Go read it even if you think you know a lot about Google. And read it fast before Google marches even farther in the journey to success. And do leave your comments if you have read this already.An interesting book on a great company.
Interesting links:

And in closing, a visual, with a question.

(Picture taken by me)